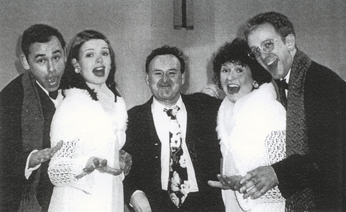 A member of ITC.

JTC was formed by its Creative Director Tony Jasper in 1992, as an extension of his work as an actor and  playwright.

Various productions have been highly praised by both  secular, theatre and religious press.

Although it does have a general revue and play catalogue, JTC basically specialises in religious history, in historical event and personalities who have shaped general social and political movement, as well as the Christian church. JTC can put on anything between three and five productions a year, and although based in London, England, it travels the length and breadth of Britain, and wishes to increase its forays overseas. It plays  theatres, churches, schools, prisons, private houses, festivals - ask us, and  we come!

Cost of productions varies according to cast size, and length of the production, but the Company works on a minimalist basis, and does not cause enormous upheaval with complicated stage and lighting sets.